The Long Beach Peninsula in Washington is a place where it seems like everyone knows everybody else. We hung out at Adelaide’s Coffee Shop and Bookstore in Ocean Park for two afternoons, enjoying great coffee and working at a huge dining room table. I loved overhearing each customer greeted by name and watching people congregate and catch up over coffee and treats. I saw the owner’s mom, aunt, and dad (I think) even come in and out periodically. The whole environment was hospitable. Jack’s Country Store, just down the road felt the same way!

The kids and I had headed out for a quick hike at Willapa Bay in the morning, finding one cool Connor the Crab to bring home (he was dead), and then headed to Adelaide’s to rejoin Don for lunch. Have you ever had egg, ham, cheese, lettuce, tomato, and shredded CARROTS on a kaiser bun? It was delicious!

After the kids read for a while, they headed out on their own, about a block or two down to the beach to look for a geocache while Don and I worked. An hour later, I called just to make sure they were alive and well. Sure enough, they were wet, sandy, cold, and laughing.

When Adelaide’s closed, we had received a personal invitation to visit the library. When does that ever happen? Since it’s never happened to us before, we took up the offer and headed over. They had a special activity where each person could make a gift jar of bean soup to take home–ribbon, recipe, and all! The librarian was so great and gave us several suggestions for new books to try like The Time Warp Trio, The Waterhorse by Dick-King Smith, and Guys Read. I had a fun time reading a couple picture books to Isaac and Jadyn. I’m going to miss it if they ever get too old for that! I think I enjoy them as much as they do! 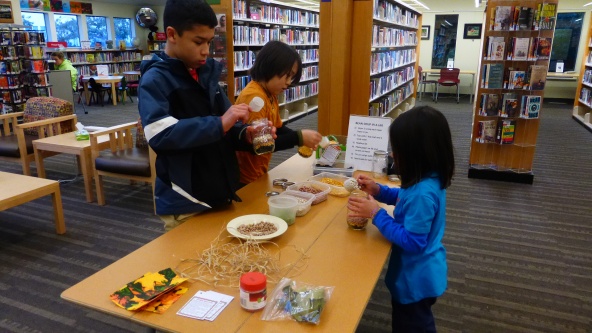 Anyhow, as we were about to leave, Don asked the librarian if she had heard of a guy named Bill from Unshelved. We had met him and his family in Seattle. She and the other librarian lit up! Of course they had! Bill and Gene were like “rock stars” to the librarian community! They couldn’t believe that we got to have lunch with his family and see where he worked. It was unbelievable. Felt like such a small world. 🙂